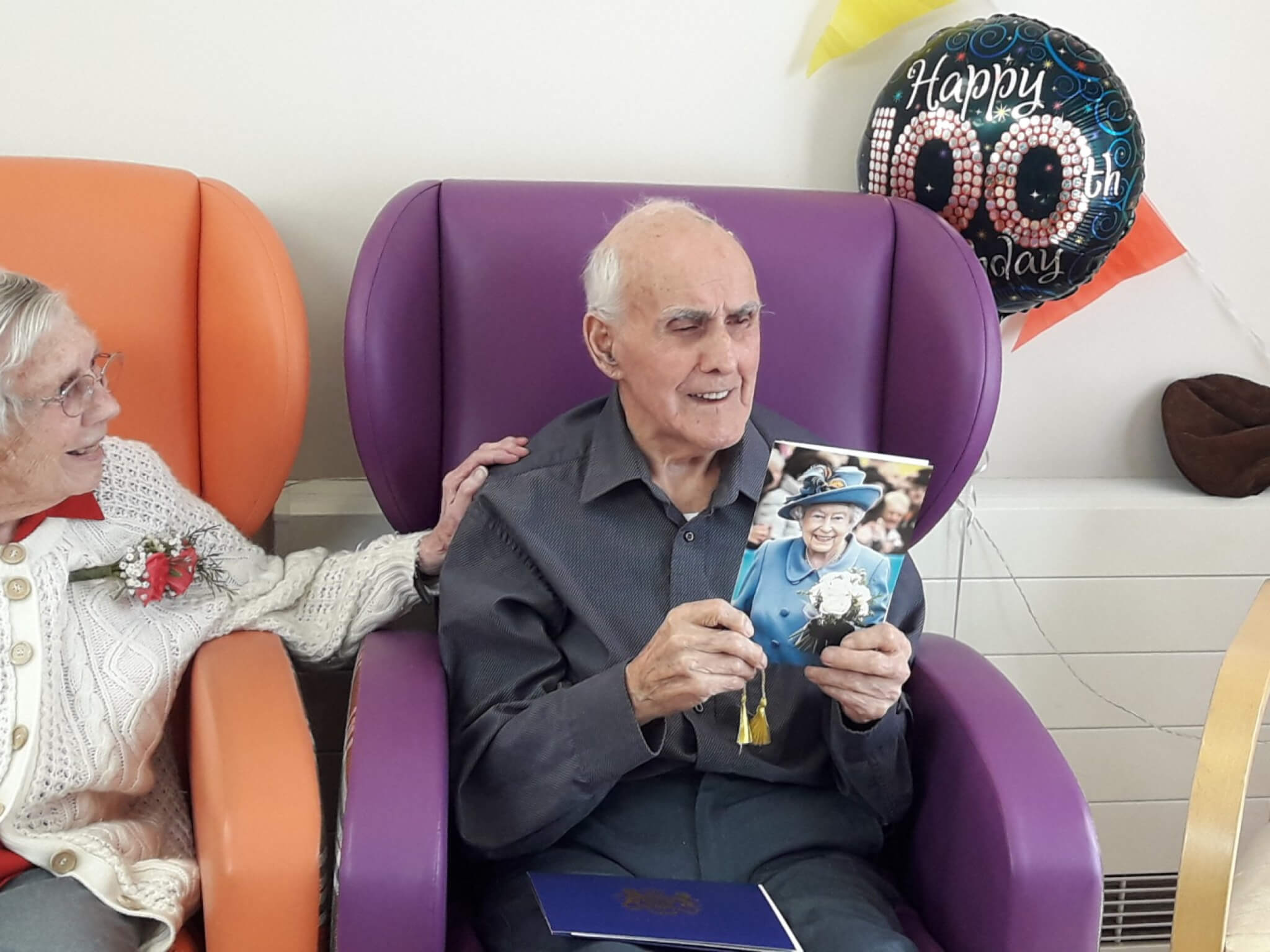 A D-Day veteran who still carries shrapnel from wounds received in Normandy in 1944, is celebrating his 100th birthday at Avalon Nursing Home in Bridgwater with family and friends in attendance to mark his formidable century.

William Leo Jennings, known to all as Billy, is a past president of the Somerset Golf Union, and former captain of Enmore Golf Club where for many years he and his wife Jean were ‘the pair to beat’ in club competitions.

Born in Ireland and raised near Liverpool, Billy met Jean – who also now lives at Avalon – at the local badminton club and they married in 1951.

His first job after the war was in the sports department of Browns of Chester, and it was in Chester that the Jennings’s son Andrew was born in 1955.

Three years later the family moved to Colchester when Billy became a travelling sales rep for leading golf club manufacturers of the day, Spalding UK, a ‘dream job’ which came with a company car.

Billy, already a keen golfer by this time, was snatched up by the local golf club – in spite of a long waiting list – when they learned his handicap was scratch.

Said Andrew Jennings, taking up the story: “They found a place for him straight away when he told them about that, but this was the beginning of a confrontational period with the ‘bigwigs’.

“Billy wasn’t known for hiding his light under a bushel. When something needed to be said he usually said it, although actually this made him many friends among the members.”

When Spalding UK was sold to Spalding US the new American managing director might have been taken aback when Billy challenged the likely success in a British market of some of their new plans, but instead Jean says he came over to shake hands and told Billy: “You aren’t a yes man! I can see you and I are going to get on.”

Working for Spalding, meant Billy met many of the leading lights in the sporting world, especially in golf since he manned the company stands at the Open Golf Championships and he played many games in the late 50’s and early 60’s with some of the world’s best professionals.

In 1964 the family moved to Bridgwater when he took up a new job as a West Country sales rep for Thomlinson’s Golf.

In his spare time, Billy dedicated many hours to Enmore Golf Club’s competitions committee as well as helping the county juniors, and was appointed Somerset County President in 1990. He is a life member of the Club.

He also took up the role of voluntary treasurer for Bridgwater Sea Cadets where Andrew was the commanding officer, receiving a commendation from the captain of the corps for the practical support he freely gave.

Billy and Jean’s son Andrew and daughter-in-law Betty, both frequent visitors to Avalon, and who live in North Petherton, were among the guests at Billy’s party where they were entertained by professional singer Rebecca with guests joining in with a sing-along to popular songs from the 40s and 50s.

The family laid on two birthday cakes for the party decorated with some of their favourite pictures of Billy, and the celebrations finished with a glass of bubbly and Andrew presenting his father with his telegram from the Queen.

Avalon is run by award-winning specialist dementia care providers Camelot Care, who operate other homes in Wellington and Plymouth www.camelotcare.co.uk

Want to join the discussion?
Feel free to contribute!